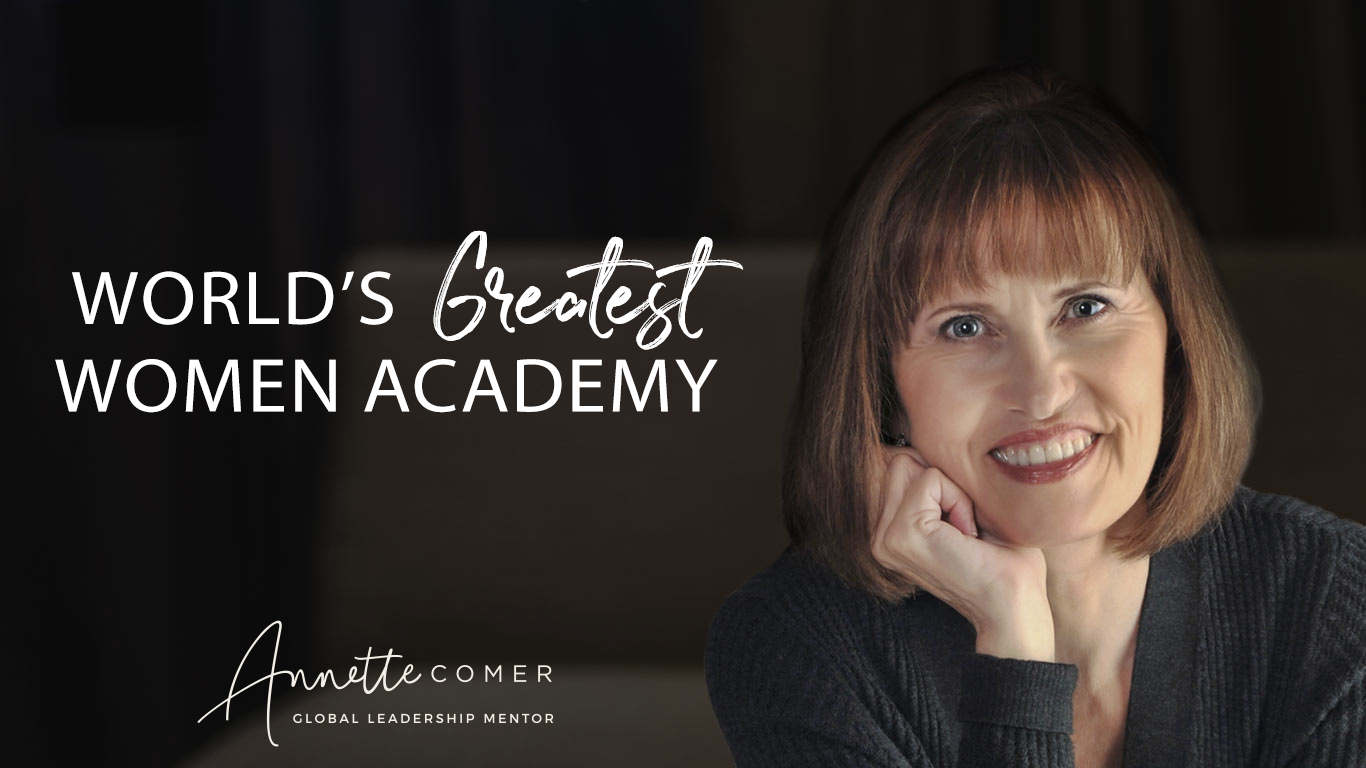 What is World’s Greatest Women Academy?

World’s Greatest Women Academy is a 3-day exclusive training immersion for driven professionals and entrepreneurs (like you!) who want to be seen, heard and respected for the hardworking, talented woman you are. It is the only place in the world that provides an interconnected Power Up Formula that equips you with the skills, tools and environment you need to reach your goals and dreams.

This powerful training is not targeted to the masses

but to you, the driven woman, who says, “I really want to go to the next level of growth and am willing to put in the effort, and I want someone to show me exactly what I need to do to get there.”

Where can you go to discover what you don't know that might be holding you back?

And to learn the skills you need to step into the power of possibility?  The possibility to earn more money,  have more recognition, have more time and to get into a position where you make the rules.  Only one place; the unique World’s Greatest Women Academy.

Lisa, CEO of Schoppmeyer Financial,  used to struggle with having time for family and friends while running a successful business.  After attending the World's Greatest Women Academy, she now knows how to run her company and have  a life she loves!

In three transformational days, you’ll develop skills, insights and strategies to dramatically improve your ability to excel in today’s male dominated world and the challenges it presents.

You’ll no longer be ignored, tuned-out and compromised.

You'll become more self-aware. You'll up level in all areas of your life.

Mary Pizarro, General Manager of American Foods Export Services, worked hard and was more experienced than anyone else in the company,  yet she was stuck.  She had tried to get to the top position in the company for years. And when she applied what she learned at the World's Greatest Women Academy, the top spot finally became hers to claim.  Let Mary tell you herself what happened.

You’ll discover what you need to stop doing. You’ll quit spinning your wheels wasting time and be ready to move onto the next level of success - whether it be in your business or your career.

Dr Sheri Prentiss, though well accomplished, was often ignored when she ask for support for her L.I.V.E. Today Foundation. But all of this changed for her after attending the World's Greatest Women Academy.  Listen in to what she has to share.

This immersion is like nothing you have ever attended. You'll finally get the inside knowledge of why you are not excelling as fast as you should.

And you'll walk away with more self-awareness and confidence ready to tackle whatever comes your way.

The attendance is limited and the participants are hand picked so as to create a safe, intimate space where driven women can create a strong supportive network that truly  "gets them".  And don't expect to see any boy’s club non-sense where you’re taught to ‘dominate the world’ at the expense of your family and your values.

Annette Comer, the founder of the  World’s Greatest Women Academy, knows what it feels like to push back against a society that is conditioned with expectations that do not support a woman being  a successful boss and leader.

She started her career as a young mechanical engineer in a workplace where she was the only female professional.

She heard a lot of “should nots” (like she “should not” wear makeup) and was often ignored, tuned out and made to feel small.

And she was often lonely.

Finally, at 29 years of age, she had had enough “should nots”. She decided boundaries would no longer hold her back.

So her attitude changed but the the feeling she wasn't good enough didn't.

So she stopped waiting for her employer to power her up...to make her good enough.  Instead, she invested in herself whenever she could and decided she was the one who had to be in control of her future.

As she moved through the next 10 years, she moved into every position available in corporate from project engineering to production management to research development and management.

And everywhere she looked, there were lots of men…but not many of her.

While in corporate, she got 2 patents even though she didn’t have a PhD. She was awarded the Woman Of The Year by The National Association of Professional Women.

Along the way, she developed her entrepreneurial skills

by starting her first company. Then came a second company, followed by a third and a fourth.

She authored the bestselling book “Rescue Me! How To Save Yourself and Your Sanity When Things Go Wrong”, teaching real solutions and tools to work through tough situations.

At the same time, Annette became a student of the world.

She studied at five international universities and went on to transform driven individuals in North and South America, Europe, Asia and the Middle East.

In the afternoon we move to training your mind for risk, winning and endurance. To be the greatest means you have to be able to think quickly on your feet, be able to evaluate chances of success, and possess the mental toughness to move through challenges as they present themselves. Without these skills, you tend to more easily burn-out, stress out and tune-out.

In the first half of the day you develop a personal radar system that makes it possible to assess accurately what is happening around you and react with smarts as opposed to emotion. Having this skill keeps you from being blindsided by unexpected circumstances that can knock you off your game quickly and leave you wondering what just happened.

In the second half of the day we dig deep into developing your Conversational IQ.  You most likely are making all kinds of communication mistakes that lead to you being ignored, talked over and passed over. But when you learn how to stop making these mistakes and  how to flex your communication style (depending on whether you are talking to men or women) then everything changes!  You become seen as confident, capable and someone worthy of being heard.

This day we deep dive into what kind of vibes you give off that might be hurting your chances of rising to the next level of success. You might think this is about how you dress, what hairstyle you wear, etc. and yes, we talk about these. But these are not what really get you noticed. It's the stuff beneath the surface that can make or break how people see and react to you. We dig deep into 5 things you need to project an executive presence that others notice. And when you get these 5 things right, you’ll become a more confident and impactful woman that others can't ignore!

APPLY FOR A COMPLIMENTARY "MY NEXT BEST MOVE" CONSULT TODAY!

Ever wonder what your next move should be in your career or business? Do you wonder if the World's Greatest Women Academy is that next right move?  Click on the "APPLY HERE" button below and let's find out with a complimentary strategy consult ($750 value). You'll be asked a few questions and if it seems spending time together is a fit, then we will get on the phone together. Here we will discover what is the one thing you are doing (or should stop doing) that can make the biggest difference in your business or career RIGHT NOW. And if the advanced training of the Academy is your next best move, then we'll discuss how to make that happen as well.

See You At  The Next

QUESTIONS? Email us at [email protected]

EARNINGS DISCLAIMER: We don't believe in "get rich" programs - only in hard work, serving and relating to others with excellence and integrity. Our programs are intended to help you grow personally and professionally and to help you be a world class leader who makes a difference in the world . Our programs take a lot of work  just like any worthwhile endeavor or professional program. Please don't enroll in our programs if you believe in the "get rich quick" myth; we only want serious people dedicated to real professional development who want to serve others and move our world forward. As stipulated by law, we can not and do not make any guarantees about your ability to get results with our ideas, information, tools or strategies. We just want to help you grow personally and professional by giving great content, direction, and strategies. What we can guarantee is your satisfaction; we give you a 30-day 100% satisfaction guarantee on our on-line courses and on our live events, a  first day full refund policy. You should know that all products and services by our company are for educational and informational purposes only. Nothing on this page, any of our websites, or any of our content or curriculum is a promise or guarantee of results or future earnings, and we do not offer any legal, medical, tax or other professional advice. Any financial numbers referenced here, or on any of our sites, are examples of what is possible but should not be considered average earnings, exact earnings, or promises for actual or future performance. Making decisions based on any information presented in our products, events, services, or web site, should be done only with the knowledge that you could experience risk or losses just like any entrepreneurial endeavor. Use caution and always consult your accountant, lawyer or professional advisor before acting on this or any information related to any aspect of your life.  You alone are responsible and accountable for your decisions, actions and results in life, and by your registration here you agree not to attempt to hold us liable for your decisions, actions or results, at any time, under any circumstance. All of our terms, privacy policies and disclaimers for this program and website can be accessed via the link below. We strive to be transparent, and we hold ourselves (and you) to an incredibly high standard of integrity.